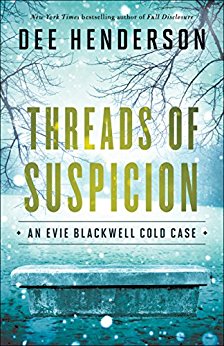 Threads of Suspicion by Dee Henderson is the sequel to Traces of Guilt, the main character of each being Evie Blackwell. Evie is one of the lead investigators for the Illinois State Police and has recently accepted a spot on the governor’s new Missing Person’s Task Force. She is partnered with a man named David, and each person on the task force starts looking into individual missing person cold cases, but help each other out in crunches.

Evie’s case involves a college student missing for nine years. Much of the job is going through old information and details, re-interviewing people involved, getting an idea of the personality and lifestyle of the victim, forming and ruling out new theories. Evie describes it as tugging on various threads to see which one starts to unravel the case.

David’s case concerns a missing private investigator, and there are some surprising coincidences connecting their cases and even David’s personal life.

Evie’s less successful at unraveling the threads of her own personal life. She has been seriously dating a banker for some time, Paul, and he’s ready to propose. But Evie has doubts. First, she’s a little engagement-shy since she has experienced three broken engagements before. Plus there are significant differences between herself and Paul – their jobs, their personalities, their ambitions. Would those differences complement each other or pull them away from each other? Plus Evie really likes her job and lifestyle and isn’t sure she’s ready for the changes marriage would bring.

As I said of the first book in the series, this is not what you’d call an action-packed book, though action and suspense are in places. It’s more puzzle-solving, following the threads with Evie and seeing whether you come up with the same theories. Plus in both books, the faith element is natural and unforced. And, as with the last several books, there is some crossover of characters from previous stories, and though that’s fun, I think you could still enjoy this as a stand-alone book if you haven’t read the others. I always enjoy Dee and am looking forward to Evie’s next installment.