Mocha With Linda hosts a weekly meme called Flashback Friday. She’ll post a question every Thursday, and then Friday we can link our answers up on her site. You can visit her site for more Flashbacks.

The prompt for today is:

How was your family structured when you were growing up? Did you grow up with both original parents in the home? If your parents divorced, did you go back and forth between them? Whether divorced or widowed, did your parent remarry? How old were you? Was yours a multi-generational household with grandparents living with you? Did your mom work outside the home, and if so, was it full-time or part-time? Was there a clearly delineated division of labor between your parents (or parent and step-parent) and how traditional was it? Did your parents believe in child labor?! That is, how structured were chores? What responsibility, if any, did you have for things like doing your own laundry, fixing your own school lunch, etc.? Were your parents do-it-yourself-ers or did they hire people for repairs, painting, etc.? Is your current marriage/family structure similar to the way you were raised? What do you do differently than you did then? 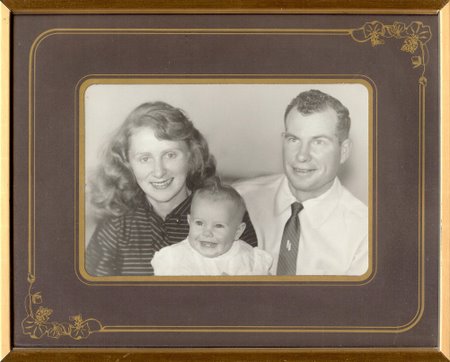 My parents married right after my mom got out of high school. They were originally going to wait two years and work and save money, but my father’s father was dying and told them that if they wanted him at their wedding, they’d better go ahead and have it. Years later, with the wisdom of hindsight, my mom said that if they had waited, they probably would not have gotten married. But then I wouldn’t be here. 🙂

My father was an alcoholic and a very insecure, jealous, angry man, though all of those characteristics were just in embryonic form at that point. He probably was not a full-fledged alcoholic then, but he did drink, and my mom thought that when they got married that would take care of the jealousy and insecurity. She was wrong, and may I say to anyone contemplating the same thing, you will most likely be wrong as well.

I grew up with both parents in a pretty traditional nuclear family the first several years. There was some period of time we lived with my mother’s father, but I don’t remember how long that was. Overall things were pretty stable — an occasional fight, and occasional drunken binge, smatterings of financial trouble. But I do remember feeling more happy than not, the occasional blow-ups passing through like a summer storm.

But the anger and drinking escalated. I don’t know whether it was the natural progression of things or whether my dad just couldn’t handle life’s increasing pressures with five children or what, but it got to the point where neither my mom nor any of us kids could do much of anything right, there was constant tension and fear of saying or doing the wrong thing to set him off. I don’t remember physical abuse per se beyond an occasional undeserved spanking: I do remember my father slapping my mother once. Years later she said there was more physical abuse than that, but I don’t know whether I just blocked it out or they kept it behind closed doors. But the withering verbal abuse was bad enough.

When I was almost 16, my mother left my father after 18 years of marriage (and, as I shared in my testimony, God used these things to bring me to Himself) for another man who was 13 years younger than her, only seven years older than I was…and, yes, that was pretty strange at first. He and I did eventually come to respect and care for each other, and he and my mom were together until she passed away, I think some 22 years later. They had one child together, but I rarely think of her as my half-sister — we were all just siblings. My brother lived mostly with my dad, and my next oldest sister stayed with him for short periods of time, but the rest of us stayed with my mom.

My parents’ division of labor at home was pretty traditional. But when my mom and step-father got together, many Saturdays you’d fins him cooking and her cleaning out the garage, at least until she got older and started having health problems and became less active. The older she got the less she seemed to like to cook. My step-father makes a wonderful pepper steak — I crave it sometimes.

We kids didn’t often have specific regular chores when I was younger, but we were expected to help any time we were asked. As a teen-ager it was my responsibility to get dinner started: I’d call my mom at work and see what she wanted me to do, and, depending on what it was, I’d often have it pretty much ready by the time she got home. I know I helped with general house-cleaning, but I can’t remember if I had specific regular responsibilities or just generally pitched in.

Both my dad and step-dad were do-it-yourselfers. My step-dad was a wiz at fixing cars until they became computerized — I don’t know how many weekends some friend or another brought their car over for him to look at.

My own home is pretty traditional. I cook, though my husband grills sometimes. I do the bulk of the cleaning and shopping, though he sometimes pitches in. He would likely do anything I asked him to around the house, but he works long hours and I don’t want to pile more on him by expecting him to do housework as well, plus his weekends are usually pretty full. He takes care of the outside, the cars, and pays bills. I did have my kids do basics like picking up their toys and such when they were little, and I don’t remember when they first started having regular household chores, but for many years almost every Saturday I would make a list of what needed to be done — usually vacuuming, dusting, and taking out small garbage cans — and let them take turns having first pick of whatever jobs they wanted most preferred to do. They also took turns unloading the dishwasher and taking out the kitchen garbage every night after dinner. They were responsible for their own rooms (when they were very little we cleaned their rooms together, but of course as they got older they took on more and more of it on their own). We had to adapt that as they started going to college. Now with just one at home, I’m having to take back some of those chores! But there is less to do in the realm of laundry and dishes, so I guess it balances out. They were also expected to help out with family projects like painting rooms, taking down wallpaper and tile when we remodeled the bathroom, etc. It was not only a help to us, it was a learning experience for them, and it had moments of fun family fellowship as well. They also divided up the grass-cutting.

Back to my dad for a moment, I told more of his story here, and he eventually did come to know the Lord. As I wrote there:

I was surprised that I had a great deal of anger in the years after he died — anger that our relationship wasn’t what it could have been, and though I couldn’t talk to him about it, anger at his anger. I felt it was kind of silly, really, to be angry at that point when there was no way to reconcile anything with him. I have read, though, that those feelings are pretty normal. What helps is to know that since he did come to trust Christ, now in heaven, where “the spirits of just men [are] made perfect,” knowing what he knows now, everything is all right on his end and he would do things differently if he could.

I just wanted to share that for anyone wrestling with similar family issues. I can forgive him now on that basis but more importantly on the basis of Christ’s forgiveness of me.