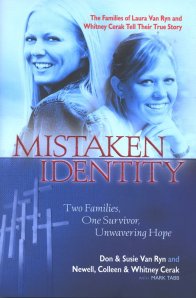 I had seen the book Mistaken Identity on bookshelves, but hadn’t really looked at it. I thought it was fiction, and I had read other fiction books with a mistaken identity plot line, and, though they were interesting reads, there was still an air of unreality about them. This couldn’t really happen, at least not to this extent where closest family members are mistaken.

I caught an interview with the families on one of the evening news magazine programs, and my heart was knit to theirs as their faith shined through their tragedies. I then went out and bought the book as soon as possible.

Laura Van Ryn and Whitney Cerak were among several university students riding in a van back to school after working at a banquet when they were all involved in a horrific accident. Five people died, and Laura was taken to the hospital with several broken bones and a traumatic brain injury. Only it wasn’t Laura: it was Whitney. She was misidentified based on a nearby purse with Laura’s driver’s license in it. Though at first glance the girls look different enough to tell apart, when you look at individual features, they share an uncanny resemblance. Laura’s family had no reason to believe this girl was not Laura, and all the little inconsistencies could be explained by the accident (calling her sister by four different names, for instance, was consistent with the type of brain injury she had). Whitney’s family had chosen not to see her body; they wanted to remember her as she was.

It was not until five weeks later, when Whitney was able to communicate a little more clearly, that they realized she had been misidentified. The Ceraks were at first unbelieving but then overjoyed to find their daughter alive while the Van Ryns had to come to terms with their daughter’s death, and they all had to deal with unwelcome media attention during these events.

What touched my heart even more than their stories was the way their faith was evident at every turn. The Scriptures shared at various junctures perfectly upheld them, though of course it did not take away from the pain they experienced. Their grace in dealing each each other, the truck driver who caused the accident, and everyone along the way is evidence of God’s grace in their lives.

In Isobel Kuhn’s book, In the Arena, she quotes I Corinthians 4:9 (“For I think that God hath set forth us the apostles last, as it were appointed to death: for we are made a spectacle unto the world, and to angels, and to men”) and explains that Paul probably had in mind the Roman arena where Christians were thrown in to be devoured by wild animals. Our trials great and small can have multiple purposes, but, she says, one of them surely is to reveal God, His power, character, and grace as it is worked out in His people’s lives (not only to people, both believers and unbelievers, but to “principalities and powers in heavenly places“) . I often think of that when I hear news stories that have captivated the nation and then find out that the people involved are Christians.

One of the paragraphs that most grabbed me was a journal entry by Carly, Whitney’s sister, before she knew that Whitney was still alive:

Death is Satan’s greatest way to attack this world. Amazingly, then God takes what Satan uses to attack us and uses it to bring us together and reveal Himself the most. Through Satan’s greatest strength, God’s power still overcomes and is stronger.

I had never thought of death in that way, but it is so true that even at Satan’s strongest point, God overcame not only to resurrect those who have died but to provide immeasurable comfort to those who are left behind.

I highly recommend this book to you.